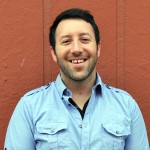 Spring semester of ’06 at Indiana State University (ISU) is and will always be a cherished time for me. That is the semester I gave my life to Christ and it was a radical change. My roommate at the time said he had never seen somebody make such a drastic change and he grew up in church. Before I gave my life to Christ it was trek of believing in evolution and then searching for truth and depression all playing in it and living the college life was crazy. In the end when God opened up my heart to what Romans 6:23 meant for me it changed me. Also Proverbs 30:5 spoke into my life about Him and His Word being fully truth and that He is also the One who protects me and I give Him all of my burdens to carry and its not just me trying to get through the day, but it’s Him guiding me through the day.

That spring semester was my last full semester at ISU. I worked at a factory for almost a year and then I went to Calvary Chapel Bible College for two years. My last semester there I was praying and telling the Lord I would go anywhere for Him except back to Indiana. So I came back to Indiana thinking I was going somewhere else because I already had those plans made, but those plans fell apart and I was stuck in Indiana and I had nothing. I started to attend different churches and to see where is it that God wants me to call my home fellowship and finally after a summer of looking I came to Harvest Chapel.

I enjoyed it, and felt like I was free to worship and God gave me a peace about staying at this fellowship. I met with Pastor Tom the week later and he mentioned this idea about a discipleship program and he told me to pray about it and so I prayed some about it and whenever we would talk, be it at the Bible study or after prayer or whatever, our conversation would sometimes include the discipleship program. Eventually God laid on my heart that I was going to be the leader of this program and the next time Tom and I talked he asked me to be the leader of it. So I pretty much knew from that point where I was suppose to be but I still needed some more confirmation in my life. It came while I was at a concert with my good friend Andrew. As time went on God gave opportunities to serve Him in different capacities and that is how I became into the position I am with Harvest Chapel.